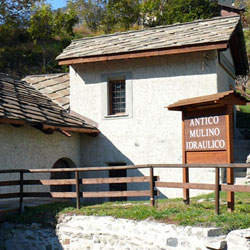 The water mill at Salbertrand is one of the most interesting and best preserved in the Upper Susa Valley. It is the only one that still contains the original machinery from various periods. It allows us to travel back through 800 years of the history of water use, from feudal milling rights to the introduction of electricity.

The water mill, known as the Martinet mill, probably started life as a forge around the 11th century and then in 1200 it became a multi-functional water mill: producing flour, hemp and felt.

We read about the mill for the first time on a parchment dated June 5th 1298.  It was the property of the feudal lord, the Allemandi family. Its ownership changed many times until the community of Salbertrand obtained full possession of it, free from the power of the Dauphin, with the charter of 1459.

This water mill does not have the traditional vertical wheel. It had four or more little horizontal wheels, typical of mountain water mills which had to cope with climate extremes and fluctuations in the flow of water. From 1901 the factory began to produce hydroelectric energy and the Salbertrand Municipal Electricity Company was born: one of the oldest in Piedmont.

During the night the water mill produced hydroelectric power (HEP) lighting up the village streets, during the day the power was transferred to the mill. 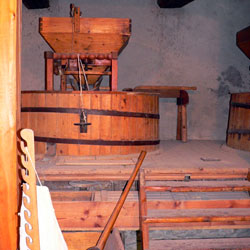 The water mill we see today is the product of many transformations that have occurred over time, also linked to natural, historical and political events of the valley.

The building belongs the municipality of Salbertrand  it is managed by the Park of Gran Bosco of Salbertrand, it has been recently restored and houses three distinct spaces:

1 The real mill has three pairs of millstones (one pair of which was always rested in rotation for maintenance) for processing grains, above all rye, but also wheat, barley and oats.  Once milled, the flours were transferred by means of a Archimedes Screw and a lift system of spoons to a sifting device (bařütè) made from silk with mesh of differing grades to select fine flour, normal flour, flour for animals and bran.

To the right of the entrance, even to the present day, is a stable which housed the mules which the peasant farmers used to transport the cereal sacks to be milled. In fact it was the custom that each farmer took turns to mill his own cereal....that was the opportunity for the famous "mill chatter" to talk and bad-mouth a little about everyone else.... 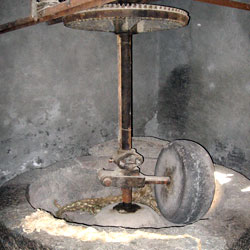 2 The press (in Italian la pesta, in Occitan la pitä) is a large, circular stone tub on which a vertical wheel rotated to press a variety of crops. It was used for the defibration of hemp, the foremost textile plant in the Susa Valley.  It also produced oil from walnuts, hazelnuts, hemp and flax seeds and the wild plums.

The so-called Marmot oil wasn’t made from animals! It was an oil made from the seeds of a wild plum, Prunus Brigantina, a particular species native to the Western Alps, also known as the Briançon apricot. The plum was harvested at the end of the summer and was left to macerate in the open air to separate the pulp from the nuts.

During winter, in the stable, the plum stones were crushed to extract the seeds.
The seeds were pressed, then heated to increase the yield (it was an hot treatment to extract the oil), and pressed again to extract a clear, golden-yellow oil used either in food dressings or for lighting. 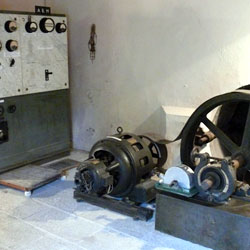 3 The systems for electrical energy production and distribution witnes to the story of the last century of this ancient mill and the local Electric Company.

In 1957 a terrible flood marked the end of the activity of the hydroelectric system. The millstones continued to work powered by hydroelectric energy produced elsewhere until 1970 when the irrevocable end of an economy based on self-sufficiency led to the disappearance of the extensive cultivation of cereals and the need to grind them.

Recently, inside the mill, new spaces have been restored and museum installations have been created for displaying a collection of tools and objects in daily use in the past, donated by members of the local community.