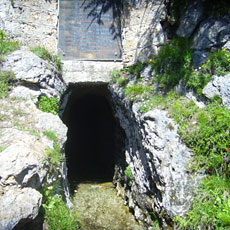 The Gran Pertus is a tunnel dug in the rocky mountain by Colombano Romean to bring water from Tuilles Valley at the foot of the Niblè mountain to irrigate the arid fields of Cels and Ramat above the villages of Chiomonte and Exilles.

On the walls of the tunnel there are many sculptures, such as crosses, faces, snowflakes and Fleurs de Lys which Colombano made so he did not feel so alone. There are also many niches carved expressly to hold candles aligned to ensure his excavation continued in the right direction.

The communities of Exilles and Chiomonte had agreed to commission the excavation in 1504, but it took over 20 years of discussions and the search for a suitable person before the work finallybegan. The tunnel took seven years to build, from 1526 to 1533.

The village inhabitants promised to pay him for his work with money, a sack of rye, wine, tools, bellows and coal every month and to support him for the rest of his life once he had finished.  However, when the work was completed and the time arrived to pay the final debt, stories say that Colombano mysteriously died.  There are two different accounts of his death. The first version is that he was poisoned to avoid paying him the 1,600 florins he was owed.  (To put this in context, at this time the community of Chiomonte only possessed 2,500 florins in total.)  The second version says that he died of dropsy (oedema), caused by the extremes of cold and heat he suffered while excavating, aggravated by his addiction to wine!

In fact there is no proof of these stories, the truth may be that he lived a happy life into old age.

Today, the tunnel still brings water to the fields. If you are considering visiting the tunnel we recommend that you go between August and October when the flow of water is low. Make sure you are well-equipped with boots and a head-torch. For further advice and information contact the Levi Molinari Refuge. www.rifugiolevimolinari.it