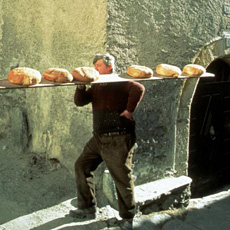 The ecomuseum wood oven is located in the hamlet of Oulme.
It is an ancient oven which belonged to the community.

In the past, baking bread was an important event for the whole village; it  was a weekly affair which each family committed to take part in, sharing the responsibility following strict methods and times.

The preparation of dough for bread took place in their own homes, using home-milled rye (blä) and wheat (frumën) flours, the yeast (creisën) was the fermented left-overs of dough reserved from the previous baking.

After two hours of proving, the dough was divided into one kilo round-shaped pieces which were placed on long boards called panheřa for transferring into the oven.

The lighting of the oven was the responsibility of every family in turn in a precise rota. This was because more wood was needed at the start of the heating process to raise the oven to the required temperature.

Pine logs split lengthwise into fourparts were used. These were called La-z-itèlla. When the fire-resistant bricks of the oven dome became white, it was hot enough and they could clean it up for baking. The embers were removed with a scraper tied to a long stick, called lë rabbi, and placed in a hole called brazī  inset into the floor.

To remove the ash, the oven floor was swept with the icuba (a brush made from strands of willow, fronds 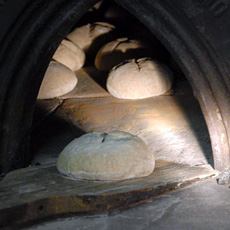 of pine or rags tied to a stick) plunged in water to prevent it from burning.

The loaves were put in the oven using lä pařä pär ënfurnā (bread paddle). The oven could hold up to 60 or more loaves at a time. If several families shared in the same batch they had to mark it with a characteristic sign to recognise their own bread (a cross, a comma, their initials...)

Three different kinds of bread could be prepared:

Pan du fū buchà, sealed oven bread. It was composed exclusively of rye and kneaded with boiling water, it required several hours of proofing; it was baked in the evening, when the oven was hot from the day's bake and it remained in the air-tight, sealed oven all night. 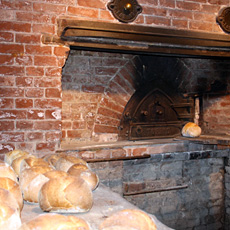 ä was made with fařinettä (second grade rye flour) and was used for feeding animals.

At the end, herb or apple pies and small loaves for children called cuřun, shaped into braids, animals or dools, were baked.

Baking Day was a time of social gathering and of celebration. There was always a tart large enough to be shared together by everyone as an afternoon snack.